Beyond Revenue Management: Principles for an Oil-Led Development Strategy in the 21st Century

Dr. Zainab Usman is a Senior Fellow and Director of the Africa Programme at the Carnegie Endowment for International Peace in Washington, D.C. Her fields of expertise include institutions, economic policy, energy policy, and emerging economies in Africa. Her forthcoming book, Economic Diversification in Nigeria: the Politics of Building a Post-Oil Economy, is set to be published by Zed/Bloomsbury Press in June 2022.

Prior to Carnegie, Usman was at the World Bank initially as part of the prestigious Young Professionals Programme and later as a Public Sector Specialist. At the World Bank, she worked on social sustainability, policy reforms, natural resources management, and disruptive technologies. She has worked on these issues in Cote d’Ivoire, Morocco, Nigeria, Papua New Guinea, the Republic of Congo, Serbia, Tanzania, and Uzbekistan. She has also worked at the Blavatnik School of Government at the University of Oxford and has consulted for the Department of International Development (DfID) and the Office of the National Security Adviser (ONSA) in Nigeria.

Usman’s research has been published on various academic, policy, and media platforms. She is co-editor of the book, The Future of Work in Africa: Harnessing the Potential of Digital Technologies for All. She also contributed to World Bank’s flagship report on Rethinking Power Sector Reforms in Developing Countries. Her recent publication in the New York Times on How African Countries Can Overcome the “Resource Curse” has been making tremendous in-roads amongst policy makers globally.

Usman’s other analytical pieces have been published with the journal of African Affairs, the World Bank’s Policy Research and Working Paper Series, and as book chapters in edited volumes with Oxford University Press and James Currey. Her written and broadcast commentary has appeared in Al-Jazeera English, African Arguments, CNN, and Washington Post, among others.

Guyana is one of the world’s newest producers of oil and gas (O/G). These resources could help propel the country to unprecedented levels of income, prosperity and well-being. Hydrocarbons endowments can also contribute to the persistence of poverty, inequalities and political instabilities. No pathway is predetermined. The success in achieving set objectives – of transforming non-renewable natural resources to long-lasting national wealth that underpin shared prosperity – will depend on strategic and flexible policy choices. These are policy choices that correctly diagnose Guyana’s development challenges in this new era, draw on lessons from the successes and failures of other resource-rich countries around the world in addressing these challenges, and harness new opportunities and mitigate risks of the rapidly changing global economy.

In short, Guyana is not bound to its history or to a “resource curse” or to the experiences of other countries; it can forge its own unique path of using its natural resources as a springboard for national development. Guyana must balance the short-term goals of leveraging the O/G sector to sustain high levels of economic growth through good practices in managing revenues and protecting against volatility with long-term aspirations to achieve structural economic transformation and human development by building productive capabilities and focused social investments, while navigating emerging opportunities and risks in the global economy. We know well how to do the first: designing effective systems of O/G revenue management that also create buffers against price volatility. We know very little about the second: achieving structural economic transformation in resource rich countries. And we cannot control the third: the exogenous factors in the global economy that present unanticipated uncertainties. 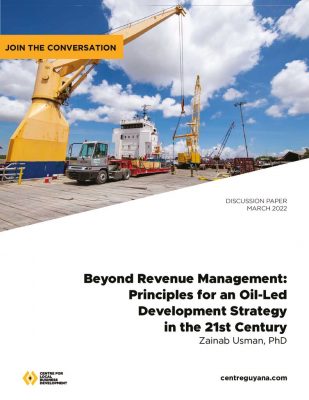 Discussion Paper - Beyond Revenue Management: Principles for an Oil-Led Development Strategy in the 21st Century

Companies that have completed the Centre’s ISO Mentorship programme share their experiences.

Tony Sinclair speaks on the importance of accessible finance in an oil and gas economy.

Centre-led discussion on the visible changes and importance of the safety culture to Guyanese.

As part of its Join the Conversation speaker series, the Centre hosted world-renowned author and energy markets expert Robert McNally. Robert McNally is founder and president of the Rapidan Energy Group and previously served on the White House staff as Special Assistant to President George W. Bush on the National Economic Council and Senior Director for International Energy on the National Security Council. He is also a non-resident fellow at the Columbia University Centre on Global Energy Policy and recently authored the award-winning book Crude Volatility: The History and the Future of Boom-Bust Oil Prices (2017). Mr. McNally authored a Centre discussion paper entitled, “The Challenge of Managing Boom and Bust Oil Prices in the Global Oil Market.”

Robert McNally explains what causes oil and gas prices to fluctuate and what Guyana can expect from its new industry. 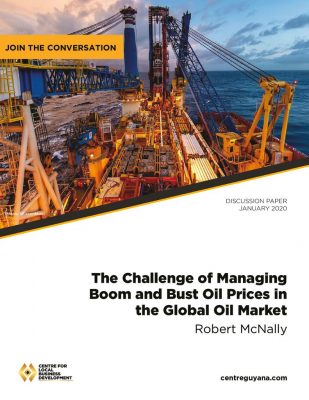